Out of the Darkness Chicago 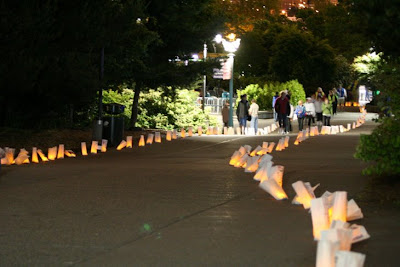 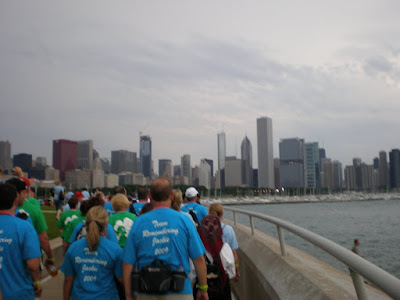 Alongside thousands of others we walked into the dawn as part of the American Foundation for Suicide Prevention's, Out of the Darkness Overnight Walk. The goal of this journey, is to raise funds for suicide prevention. I would like to help end the silence and erase the stigma surrounding suicide and its causes, encourage those suffering from mental illness to seek treatment, and show support for the families and friends of the 30,000 Americans who die by suicide each year. Suicide is the third leading cause of death among teens and young adults and the second leading cause of death for college students
Since 2000, the AFSP has awarded over 8 million dollars to scientists for suicide prevention research. Proceeds from the walks, in part, will help to fund 18 studies this year. Research is critical to learning more about interventions that can prevent this needless loss of life. Suicide is preventable and is increasing across the world.

Some facts from the World Health Organization (WHO):

I want to thank everyone who supported me in this important effort and share some of the night with you. The walk itself was amazing. The crew was outstanding, they cheered the whole way. They moved thousands of people through Chicago, fed us, cared for us, gave us fluids and walked with us. They were professional, supportive and made the experience wonderful for all.
It seemed an endless number of siblings walked with us. Everyone was telling stories of their loved ones. They were stories of joyous memories, a camping trip, a family joke, a favorite sporting event. It was nice for our family to walk with everyone and listen. We walked along the lake with a gentleman who lost his father. We emerged from the city where it was raining and there was lightening in the sky to a clear night sky and warm breeze along the lake. We walked quietly along the lake with him for about half an hour. He told us about the first Overnight Walk he did in 2006, and how it took him over a decade to bring himself to do it. It has been 19 years since his fathers death. He was excited to see his family who were to greet him at Soldier Field.

We met Dana Perry, a mother who lost her son to suicide and went on to make "Boy Interrupted," a film about her son and his death. Every story or set of beads signifying a loss was heartbreaking. We walked and listened to amazing accounts of amazing people. We had many stories of our own, but at some point in the night the chronicles became one story we all shared, a tragic loss and a walk of hope. As we entered Soldier Field our family was waiting. My youngest son needed my Gatorade-I can only assume the 10 minute cab ride tired him out! It was wonderful to see them. We walked along the path that glowed with the light of the luminaries. I thought of my friend Jeremy who reminded me that we are walking for all those who no longer walk with us yet walk through us. We are walking to save lives.

I am deeply grateful to those who supported me in the walk and to those who shared your stories about how suicide has touched your life. Thank you for helping to save lives, reach out to those families who are devastated from losing a loved one to suicide and to end the silence. Thank you for your support in bringing the devastation of this preventable loss of precious life Out of the Darkness.
Posted by Anna Roth at 9:39 AM