On June 9, 2012 I will join thousands in San Francisco, CA who are taking steps to save lives. The goal of this journey, which will begin at dusk and finish at dawn, is to raise funds for suicide prevention. I will help end the silence and erase the stigma surrounding suicide and its causes, encourage those suffering from mental illness to seek treatment, and show support for the families and friends of the over 30,000 Americans who die by suicide each year. Suicide is the third leading cause of death among teens and young adults and the second leading cause of death for college students.

Please help end the silence. You can register for the walk here, or if you like you can support us by visiting our team webpage.

Unfortunately the list goes on. To learn more you can visit the AFSP website here.
Posted by Anna Roth at 7:34 AM No comments: 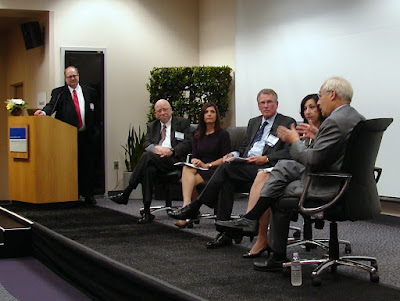 I attended a wonderful talk today by the former Administrator of the Centers for Medicare and Medicaid Services, Dr. Don Berwick.

"Waste threatens health care as a human right."
This has great meaning for me and probably confirms what many of you likely already know about me. Yes, I believe all people have a right to health and health care. Our health system should leave no one out.


"Quality is Goodness"
Taking on the broad use of the term quality, Dr. Berwick drew boundaries around the term and poignantly described meaningful quality as goodness.


What do we need to do? This is the 2.6 trillion dollar question isn't it? Here is a list to help guide us.
1. Put patients first
2. Protect the disadvantaged
3. Start at scale –move fast – go "all in"
4. Return the money
5. Act locally 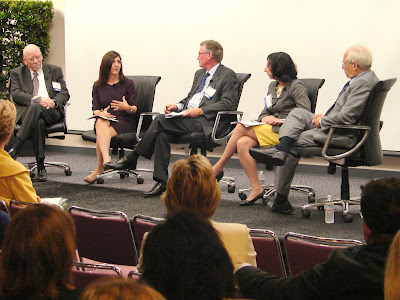 "The mission is perfection."
Yes, he said perfection. This means we must take aim at zero and 100%.


"To transform we need a transition in self-image and sense of purpose. We must accept our ethical duty to learn from and redesign our system to prevent harm."


The Ethics of Improvement


Don's dream:
That we will embrace improvement as our duty to accomplish great and ever greater good.

I was honored to join the panel today and am grateful to California Hospital Association and John Muir Health for such a rich day of learning and collaboration.

A note from the CCRMC and HC Transitions Kaizen Team 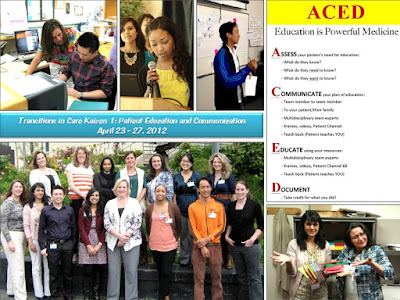 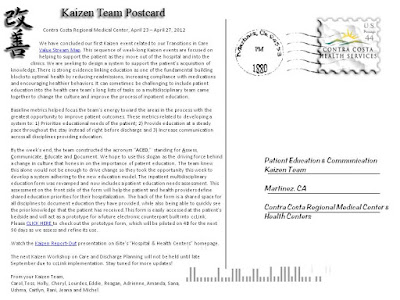 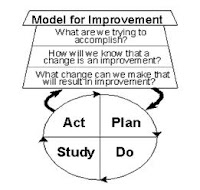 It is important now more than ever to make sure everyone understands that improvement is in their hands. All staff should be able to recognize and use the Plan-Do-Study-Act (PDSA) cycle in this critical time of change. What better time to make things better for our patients and staff?

Objectives:
After this presentation, learner’s shall be able to:
We will have time for Q&A to talk more about how the Model for Improvement (MFI) is applicable to your everyday work.

Anna
Posted by Anna Roth at 2:11 PM No comments: