One hit at a time

Growing up, baseball was taken seriously in my home. All of us kids played on some sort of baseball team. My mother recently reminded me that we never ate dinner until the Oakland Athletics’ baseball game was over. I learned a tremendous lesson about baseball and life on what felt at the time to be the worst Fourth of July in all my young years.

Our entire neighborhood packed up the station wagons preparing to head for the game in Oakland. I was so excited. It was a Fourth of July night game, so there would be fireworks, plus – as a special bonus – it was “bat day.” The bats were the full-size bats that came with a player’s signature on them. I could already feel the bat I was going to get in my six-year-old hands. As luck would have it, while preparing to leave, my nascent case of chickenpox was detected. While everyone waved goodbye, off to see the greatest game ever, I sat on the neighbor’s couch covered in calamine. My heart was broken into what felt like a thousand pieces.

Last Fourth of July, I was sitting in the stands at an A’s game reminiscing with my youngest son about being in the very same seats when I was his age. The line-up then consisted of players like Catfish Hunter, Joe Rudi, Bert Campaneris, Reggie Jackson, Rollie Fingers, Sal Bando, and Manny Trillo. They were a great team – I loved them because they were not made up of one or two stars, but a group of people working together to capture the win. They were a great team – a team that gave away bats!

What does this story have to do with health care? From the time I was a nurse’s aide as a teen to becoming a newly appointed Chief Executive Officer many years later, too much of my thinking was spent in pursuit of the next big thing. Like so many other health care professionals, I was enamored with the idea of a home run– even better – a grand slam. The roar of a crowd when a ball is smacked over the fence is compelling. I longed to make that one perfect hit resulting in the best care and the healthiest community; all at an affordable cost. The truth is, I still long for this. The trouble with this kind of thinking is not the goal itself. The trouble is that while many of us continue to dream of hitting one out of the park, excellence and continuous improvement generally aren’t achieved and certainly not sustained by swinging for the fences, but by a series of hits over time. Focusing on home runs is thinking too narrowly.

I don’t know how much time the health care industry spends in search of the magic bullet compared to time spent on deliberate improvement efforts, but it is my observation that we are often captivated by the idea that there is one single solution. Currently in my health system, we are humming with activity as we launch of our electronic health record (EHR). Although this technology is long overdue and will support improved processes and information flow, it is not the answer to all of our problems. As I listen to the discussions of our EHR, I wonder if we are wishing for a grand slam. Not only do I think such a thought would be wishful thinking, I think this kind of thinking is a set up for disappointment and confusion when the EHR alone fails to repair our health system. Additionally, this new capability to see will likely expose many complexities that have always existed in our system. That said, beyond the obvious and powerful ability to connect people, science and needed information, the EHR introduces a new state, new eyes and a new opportunities to understand even more about how we can improve our system - not a grand slam but an opportunity for many "at bats."

I am thrilled we are migrating toward a reformed system of health care in America. I welcome patient-centered medical/health homes; technologies that will support care and communication in ways that were once out of reach; methods to improve health care that continue spread as organizations cultivate cultures of improvement. These innovations however, are only as powerful as the team they support. Teams that are redesigning care need to include patients, family members, and our community as equal partners. Like a “game-changer,” these bold additions of patients and family members to our team are a “culture-changer.” A shift in culture away from longing for the “grand slam” to making sure everyone takes their turn at bat and every hit counts.

Every hit and every strike is an opportunity to learn and improve. This is critically important and it is our duty to provide those we serve with unobstructed access to the care they want and deserve. I also believe it is our responsibility to overcome the barriers and belief systems that prevent us from partnering with patients and family members as experts. It's time for a plate appearance from these important members of our teams.

The time for change is now. In America, the stage is set for us to change in ways that have been out of reach. We can't sit it out and wait for someone else to hit a home run. In health care, our job is for all of us to get better at getting better – one hit at a time. It isn’t one thing but everything that must change, including our belief about what is possible when we move forward together. 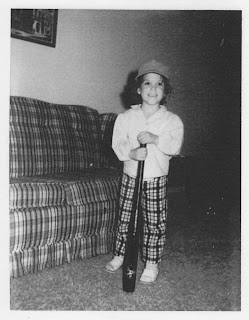 Recently, I found a website that allows the viewer to watch/relive baseball games hit by hit. I found the game I missed on that Fourth of July. Now, without even a scar left behind from the chicken pox, play-by-play, I watched and I imagined. I remembered the excitement I felt as a youth when I watched those games with my family. I also reflected on what I’ve learned since then. I’ve gained an appreciation once again of the value of teamwork and of getting better one hit at a time.

It was a great game. It couldn’t have been done without the entire team – so Thank you Catfish, Joe, Bert, Reggie, Rollie, Sal and Manny. I still have my bat!

Last week’s Kaizen report-out focused on improving our patients’ experience as they leave CCRMC and return home. In order to accomplish that goal, a dedicated Kaizen team – comprised of medical, administrative and EVS staff, a social worker and a patient representative – got together to come up with ways to reduce the lead time from when a physician issues a discharge order to when the bed is ready for the next patient in our 4B Med/Surg Unit.

Sometimes the discharge process is unnecessarily long, and that can be frustrating for our patients and our staff. And it doesn’t just affect the patient who is leaving. It means arriving patients must wait longer in the Emergency Department for their rooms to be ready.


One great improvement the team made (with the help of our patient representative) was creating a user-friendly discharge-checklist board in the patient rooms. This board provides a simple visual aid that lets patients know where they are on their journey home. It also helps staff see what patients still need before they leave – everything from whether they have medical supplies to take with them to whether they’ve received a financial consultation to whether they have a ride home.
One focus of this Rapid Improvement Event was on improving communication between the multiple disciplines involved in discharging a patient. The team worked to create a digital version of the census board on 4B that would make it more clear to the nurses and EVS staff when a doctor has issued the discharge order and a room can be made ready for the next patient. In order to expedite the cleaning of isolated rooms, the Kaizen team put together pre-assembled “precaution bags” our EVS staff can use to clean those rooms safely. This will reduce the amount of time EVS workers spend looking around for all the precaution items they need for those isolated rooms.
Some of their tests included:
·     Improving upon the front line staff’s Discharge Rounds board to close knowledge and communication gaps and provide a clearer picture of the patient’s journey
·     Having a financial counselor input insurance information before rounds, which has helped the rounds group better identify patient needs and any financial issues before discharge (d/c)
·     Creating standard work, a script and goal discharge order times for 4B d/c rounds to help guide residents and facilitators in presenting cases in a more efficient way
·     Developing a digital census board for the unit, which will show staff when a discharge order has been made in real-time through cclink
·     Developing a communication tool for the Charge Nurse to take notes during rounds of patients ready for discharge. They will hand off to primary nurse to close the knowledge and time gap of when the nurse knows about the discharge order so they can better prepare the patient, which was one of the biggest delays
·     Developing a patient-centered board for the room that clearly shows everyone involved in their care where they are in their discharge journey, what is still needed and any patient/family concerns
·     Developing a pre-packed bundle of supplies for cleaning Precaution Rooms since it would take EVS up to 15 minutes just to search for supplies
By the end of the week, the RIE team reduced the baseline lead time from the discharge order written to when the patient leaves CCRMC from 120 to 99 minutes resulting in a 17% improvement. More impressively, they reduced the baseline setup time from when the bed is empty to ready for next patient admission from 60 to 34 minutes, resulting in a 43% improvement. Though the goal for the event was to cut these baseline times by 50%, they are getting closer to the mark and I’m excited to see the outcomes after more tests.
Some of these improvements may only save a few minutes, but as our Chief Medical Officer Dr. David Goldstein put it, minutes matter and they add up. Dr. Goldstein said those are minutes a patient is spending at home instead of the hospital and time staff can spend with other patients who need assistance.
I want to thank and congratulate all of the people who worked on improving our discharge process. There were unnecessary delays in the system and this Kaizen team is helping to eliminate them. Although the 4B unit’s revamping process is still in the early stages, we’ve already seen a significant reduction in the time it takes to discharge a patient and get a room ready for the next patient. I’m proud of all those who made this Rapid Improvement Event a success. You’ve all made an important contribution to improving our patients’ journey home and our journey to being a model health system for patient-centered care.
More very soon,
Anna
Posted by Anna Roth at 7:28 AM 1 comment: