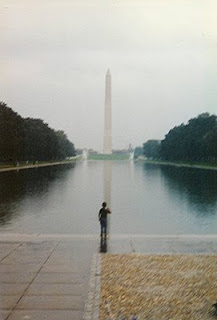 This is my son 10 years ago standing at the edge of the reflecting pool, near the base of the steps of the Lincoln Memorial. We had spent the week talking about the monuments and what they stood for. This was the moment that stands out in my memory of that trip.

To see the possibility in my child's eyes, the possibility that he could achieve anything he could imagine, was a moment I will never forget. The truth is that our children are the face of tomorrow.

Today we honor Martin Luther King, Jr. His message still every bit as relevant today. He spoke of the "fierce urgency of now" and the temptation of the "tranquilizing drug of gradualism."

Dr. King refused to settle for anything less than the the opportunity to realize the American dream for all people. It is because of his courage and the courage of many other Americans that my son could stand years later at the edge of the same pool and imagine that anything is possible.

I am eternally grateful to Martin Luther King, Jr. and the many who fought to bring freedom to all Americans.