"Customers, Cars and Culture" what can Contra Costa learn from GM?

What causes an organization to fail to see the signals for change?

GM emerges from Bankruptcy-
"Today marks the beginning of a new company, our company, one that will allow every single employee, including me, to return to the business of designing, building and selling the best vehicles in the world"
~Fritz Henderson, President and CEO of General Motors


We've heard the story of GM's fall including massive layoffs, bankruptcy,and a government bailout. Google(verb) GM's misfortune and you'll yield thousands of opinions about what brought the company to its knees, but there seem to be a few vital take-aways we can all consider to avoid a similar fate?

Make investments that directly lead to increased quality
In the 1980s, instead of strengthening it's pension fund or invest in development of best in class automobiles, GM spent 80 billion dollars on automation that did not correct GM's quality problems.

Respect the customer: Produce 'Zero-Defects'
Toyota who is known to be prooccupied in 'seeing' defects and immediately correcting them, focused on making cars in line with market and customer needs. GM vehicles were too often viewed as poorly designed and built and outdated.

Innovation and Risk-Taking
Toyota introduced environmentally friendly cars and moderately priced vehicles for emerging countries when they aimed to take the industry lead. GM, stuck to producing SUVs that helped it dominate in a low-oil-price era but caused trouble as fuel prices increased.

In a recent article Yu states "that among the many factors that contributed to GM's bankruptcy filing, its failure to innovate may have been the most harmful.Even without such problems as staggering debt and health and pension burdens, it was still almost impossible for GM to rise to its previous glory because of that lack of innovation.

Today's GM does not have the economy vehicles that could help it win back the mass market nor does it possess the new energy technology needed to lead the car industry in the future. A new GM reborn after the bankruptcy of the old GM, then, carries the hope that the automaker will emerge as a smaller but more competitive company.
" (Yu,2009)

The following is a bit winded and I am repeating some of what I said in "Going Lean" originally posted in April, but I thought it important to start at the beginning as we enter our final Kaizen Week of Wave 1 (CHF).

In November, the California Health Care Safety Net Institute (SNI)launched its Lean Core Measures Improvement Initiative. Funded by the California HealthCare Foundation, the program will introduce and spread the use of Lean as a management strategy to streamline processes and create a more patient-focused environment that supports timely delivery of treatment and other healthcare services with optimum quality at the least cost. CCRMC, along with three other public hospital systems was awarded a grant to bring 'Lean' thinking to our system.

Why Lean and why now?

"The future is already here…it’s just not evenly distributed yet." *

For many of us it's difficult to hear our system described as "financially unsustainable," but that's how our system was described at a recent board meeting. This shouldn't surprise any of us. As a government owned and operated system, we are in fact a reflection of the US Health Care system. I understand many would argue that industry is a better description than system. However you prefer to describe it, we do offer a glimpse of what the nation faces. 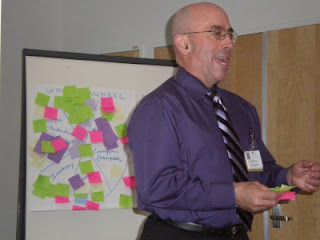 Currently health care makes up about 17% of the GDP and is climbing at a steady and very unsustainable rate. In America, we hear daily debates about bailouts, stimulus packages and health reform. Although the solutions are still in the development phase it is clear we must change course nationally and it is just as clear we must do the same here at the local level. Lean Management offers a systematic way of improving efficiency while improving not compromising quality.

Where are we now?

I can't believe we have made it to the halfway point already. It has been an amazing journey up to this point and we look ahead with excitement.

We are heading into our last Kaizen event related to CHF. This process has been challenging and rewarding. Our work has taken us to all areas of our integrated system. We began with a three day intensive of 25 executives and leaders throughout the system to learn the about Lean and the Toyota Way.

We followed our Lean Executive Session with a Value Stream Mapping event involving 16members of our system. We then engaged in a series of 3 Kaizen events each one week long with approximately 20 members from CCHS and the community. These events have taken our teams from the patients home through our system and back to the community.

We have learned that patients do not discharge from our care but that they are transitioning through an experience and out of respect for those we serve we are striving to understand the experience of care patients receive from us and provide the highest value for the patient.

Some signs of change...

• We now have a group of fellows who have participated in every step of the process and are an integral component of the system of Continuous Improvement for CCHS. -the fellows speak throughout the system and in the community and are requested on a regular basis.

• There are 2 patients/family members participating in this weeks Kaizen event.

• We are conducting multidisciplinary rounds on the inpatient medicine unit and including patients and families in the process. These are very well attended.

• Piloted a CHF nurse in one outpatient setting and are spreading to a second clinic site.

• Use of the A3 reporting process and have developed a revised CHF dashboard with key measures. This measurement methodology is now being considered for spread to all of our projects in the Performance Improvement Portfolio (PIC)

In times of great uncertainty Lean lends a sense-making approach to unearthing the hidden capacity within our system. Buried in wasteful processes lies desperately needed resources we will need as we face even more challenges in the coming months and perhaps even years. The work of our Kaizen teams has resulted in a greater understanding of the power of quality, the power of a deep respect for our customers, and the power of Lean.

In summary, in a time many systems are feeling helpless to determine their own destiny Lean has unleashed the true creativity and might that lies with our system itself.

I am grateful to SNI, The California Healthcare Foundation and The California Association of Public Hospitals(CAPH) for supporting our system on this transformational journey. Mike Rona, Pattie Crome and Tom Jackson continue to impress me week after week with their expertise in the application of Lean and it's philosophy as well as their relentless hands-on approach to the work. If you get the chance to participate in a Kaizen I warn you now, dress comfortably because your going to Gemba!

It is at this important milestone that I also want to acknowledge all of you for actually taking us on this journey. There have been many twists and turns since we began our intentional efforts toward critical introspection and system transformation with System Redesign. Our results thus far are a direct reflection of the skill and spirit in our system. I am thankful for your creativity, your skill and your dedication to serving our community. I am deeply moved by the changes I see daily as I walk through the halls of the medical center.

Please join us in our final report out of Kaizen Wave One Results on Friday July 17th at 10:00 AM at CCRMC Building One, Conference Room One.

Sincerely,
Anna
Posted by Anna Roth at 12:34 AM