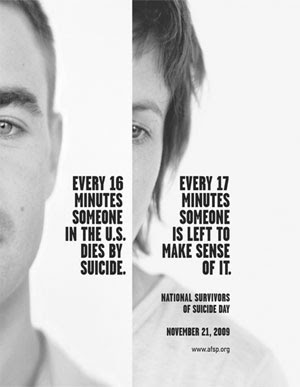 A day of healing for those who have lost someone to suicide.

It was created by U.S. Senate resolution in 1999 through the efforts of Sen. Harry Reid of Nevada, who lost his father to suicide. Every year, American Foundation for Suicide Prevention (AFSP) sponsors an event to provide an opportunity for the survivor community to come together for support, healing, information and empowerment.

On National Survivors of Suicide Day, simultaneous conferences for survivors of suicide loss will take place in the cities around the world. Please visit the AFSP website to find an event near you. There are several sites in the bay area listed. Here is a link to the conference that is being held at University of California San Francisco (UCSF), Parnassus Campus.

I will bring this event up to the Healthcare Partnership and let you know of any local activities planned on our campus.

For those who don't live near a conference site or who find it difficult to attend in person, the 90-minute broadcast will also be available from your own computer on the AFSP website from 1-2:30 p.m. EST, with a live online chat immediately following the program.

So many lost, so many left behind and all preventable.

Some facts about suicide from the World Health Organization (WHO)

Unfortunately the list goes on. To learn more you can visit the AFSP website here.
Posted by Anna Roth at 9:43 PM