Prior to working for CCRMC, I spent some working in programs referred to as “health-pipeline” programs that worked towards addressing health disparities by developing healthcare professionals from underserved and underrepresented backgrounds. I was a 20-year old intern at that time, and I immensely grateful for these programs to opening the world of healthcare, diversity, and social justice to me. In many ways, the students that I have met and their passions, motivations and inspirations for going into the field of healthcare have also become mine.


While I personally did not live in disparity, I spent a good amount of life growing up around it. I was born and raised in a middle class/upper middle class family in Manila, Ph

ilippines, and I remember daily pictures of families living underneath bridges, street children selling cigarettes or knocking on car windows to make a living, and next door neighbors without the resources to take care of their sick children. Poverty surrounded me every single day and while I constantly wondered why it was that way, I had also learned to accept it as the norm and had somehow became numb to the suffering around me.


I went back to the Philippines for the first time three years later (back in 2003), and I clearly remember the culture shock and th 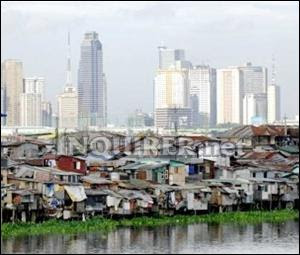 e pervasive feeling of discomfort I felt in the three months that I was there. Poverty seemed hidden and invisible in the Silicon Valley suburb I had grown accustomed to, and here I was once again confronted by daily reminders of suffering and poverty. Amidst all this, I was among the company of affluent friends and family who entertained me at beautiful resorts, posh restaurants, and daily luxuries. Manila has been consistently described as a “city of contrasts” with the economic gap between the rich and poor blatantly obvious to many of its citizens. Latest reports show that even amidst economic growth between 2000 and 2006, poverty incidence in the country in fact grew worse.

Nationally, the US does not fare any better:


We, too in fact, are a nation of contrast.


After several years of liberal Berkeley education, I remain, if not more even more, uncomfortable with these disparities. Even after several trips back home in the recent years, the pervasive feeling of discomfort remains in the back of mind and I still struggle with simultaneously juggling the two worlds of poverty and privilege all within the same place.

I shared these feelings of frustration with a mentor a couple of years back after my trip to rural South America. I shared with him my frustrations, and the guilt I felt in bein

g in a position of privilege with an education and the ability to venture off and volunteer abroad for two months. His advice has stuck with me since then, “channel all that frustration and anger into something productive – something useful that could contribute something to the world,” he said. “Instead of complaining and wondering why things are the way they are, ACT and work towards making it better.”

In light of remembering his advice, I have also come to recognize that perhaps I need to EMBRACE my discomfort with the concept of disparities. Perhaps because it is this discomfort with inequality that continues to push me to change things and make them better. That discomfort has been the one true source of motivation in my career. In some ways, I do not ever want to be comfortable knowing that gaps in quality care, income, health, education and social justice exist…because being comfortable means being complacent and being complacent means doing nothing…and doing nothing means status quo…and that in turn, means that people continue to suffer.
Posted by katherine at 5:17 PM