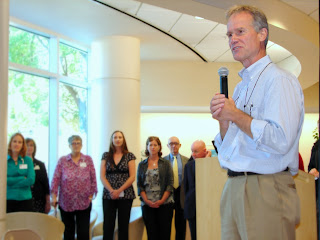 Jeff Selberg speaks to the team 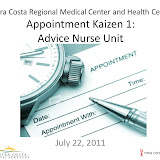 Click on the slide to see the full slide set 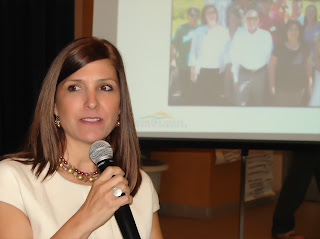 I am posting a long overdue summary of the July 22 Kaizen Report out which focused on access to our system with an emphasis on the role of the Advice Unit.

I'd like to thank the team which included employees from across our system and patient volunteers/Healthcare Partners. Without you we could not accomplish what we have thus far. I also want to extend my gratitude to Jeff Selberg, Executive Vice President and Chief Operating Officer of the Institute for Healthcare Improvement (IHI), and Mike Rona, President and CEO of Rona Consulting, who joined us at the report out. Jeff commented that he was "wondering how we will accomplish all that we have to do" he went on to say, "now I know."


I have attached the slides which should be posted both above this post and within this post. If the slide show is not working you can click on the picture above and it will take you to the slides. I will post the rest of the pictures from the report out this week.


Teams identified areas in need of improvement and in some cases began to cost out the opportunity. Each team developed proposed tests of change and began testing this week.

The Flow team  tested use of a triage system for MD access and sorting of calls.

Several ideas were considered around creation of truly patient-centered medical homes. The team has planned to test the proposed standard work with one physician in the first week of October.

Other test conducted this week included utilization of a MD in the Advice Unit. Based on national standards and protocols the team tested directing calls to an MD for intervention.

This is complex work and work that is now reaching far outside the walls of the medical center (CCRMC) into the health centers (clinics) and the health plan (CCHP). This is not easy work. It takes willingness, courage, caring and honesty to engage in a change effort [*]. Additionally, it takes constancy of purpose and discipline.


There are many distractions along the way and the force of the status quo is strong. Many have mastered the current state and their perceived power, position, and in some extreme cases, their identity can be based on that mastery. To seek a new order, to resist the urge to settle and to lead a transformation effort is indeed the work of the courageous. The first step is to change ourselves, which may be the most frightening step of all. Many will retreat to the status quo. Many will settle. We will not.

My deepest gratitude to the team and to all of you for your commitment to our mission and our community.