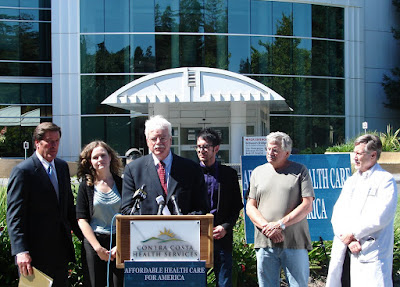 For example, no longer will insurance companies be able to cut off your insurance just because you are sick, or set annual or lifetime caps on your coverage, or deny coverage to children with so-called pre-existing conditions.

The nine new protections in a Patient’s Bill of Rights were designed to put patients and their doctors in charge of medical decisions – not insurance companies. They will take effect for plan years that start on or after this Thursday, Sept 23rd.

This means that these consumer benefits will be in effect during the next insurance ‘open season’ for consumers who receive coverage through an employer or the next time a consumer re-enrolls in or purchases a policy from an insurer.

“These are real protections against insurance company abuses,” said Miller, who co-wrote the Affordable Health Care Act. “Just six months after our historic health insurance reforms were signed into law, important consumer protections are going into effect. These protections mean that never again will your insurance run out or be taken away from you when you need it the most. And never again will a sick child be denied insurance because of a so-called pre-existing condition.

“Not only do consumers need to be aware that these new protections will take effect starting later this week – they need to know that these new protections and all the other provisions of our new law are at risk being taken away. Republican leaders in Congress and the Tea Party movement have made it clear that repeal of the health insurance law is one of their top priorities. They would put insurance companies back in charge of health care decisions for average Americans. They are once again standing on the side of the special interests, not on the side of consumers and patients.”

Rep. John Garamendi, who voted in favor for the health care and served as California Insurance Commissioner, said the new provisions taking effect later this week are critical for patients and their families.

For Plan Years Beginning On Or After September 23, 2010, Privately-Insured Consumers Will Have The Following New Protections:

1. Your health coverage cannot be arbitrarily cancelled if you become sick
Up until now, insurance companies had been able to retroactively cancel your policy when you became sick, or if you or your employer had made an unintentional mistake on your paperwork. Under the new law, health plans are prohibited from rescinding coverage except in cases involving fraud or an intentional misrepresentation of facts.


2. Your child cannot be denied coverage due to a so-called pre-existing condition
Each year, thousands of children who were either born with or develop a costly medical condition are denied coverage by insurers. Research has shown that, compared to those with insurance, children who are uninsured are less likely to get critical preventive care, including immunizations and well-baby checkups. That leaves them twice as likely to miss school and at much greater risk of hospitalization for avoidable conditions.

The new law prohibits insurance plans both from denying coverage and limiting benefits for children based on a pre-existing condition. This protection applies to all health plans, except “grandfathered” plans in the individual market. These protections will be extended to Americans of all ages starting in 2014.

5. Your health plan’s annual limits are phased out over three years
Even more aggressive than lifetime limits are annual dollar limits on what an insurance company will pay for health care. Annual limits are less common than lifetime limits – but 19% of individual market plans and 14% of small employer plans currently use them. The new law phases out the use of annual limits over the next three years. For plan years beginning on September 23, 2010, the minimum level for the annual limit will be set at $750,000. This minimum is raised to $1.25 million in a year and $2 million in two years. In 2014, all annual limits are prohibited. The protection applies to all plans, except “grandfathered” plans in the individual market.

7. You have the right to both an internal and external appeal
Today, if your health plan tells you it won’t cover a treatment your doctor recommends, or it refuses to pay the bill for your child’s last trip to the emergency room, you may not know where to turn. Most plans have a process that lets you appeal the decision within the plan through an “internal appeal” – but there’s no guarantee that the process will be swift and objective. Moreover, if you lose your internal appeal, you may not be able to ask for an “external appeal” to an independent reviewer. The new law guarantees the right to an “internal appeal.” Also, insurance companies will be prohibited from denying coverage for needed care without a chance to appeal to an independent third party.

8. You have the right to choose your own doctor
Being able to choose and keep your doctor is highly valued by Americans. Yet, insurance companies don’t always make it easy to see the provider you choose. One survey found that three-fourths of the OB-GYNs reported that patients needed to return to their primary care physicians for permission to get follow-up care. The new law: 1) guarantees you get to choose your primary care doctor; 2) allows you to choose a pediatrician as your child’s primary care doctor; and 3) gives women the right to see an OB-GYN without having to obtain a referral first.

For more details, consumers are urged to contact their individual provider or human resources department. Consumers can also visit www.healthcare.gov