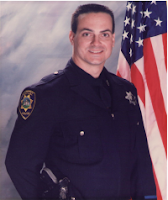 Remembrance Event for Sergeant Paul A. Starzyk on Monday, September 6, 2010

Martinez Police Department will host a public remembrance to honor Sgt. Paul A. Starzyk, who was killed in the line of duty, September 6, 2008

7:00 AM- Uniformed personnel form up in front of the fountain near the flag pole.

7:10 AM - Honor Guard to present flag and memorial flag at half staff in front of City Hall

8:00-11:00 AM - Council Chambers open to public for public memorial; small guided tours of the memorial wall inside the police department

"The wicked flee when no man pursueth: but the righteous are as bold as a lion."- Proverbs 28:1
Posted by Anna Roth at 9:55 PM